So, a score of us went to Prodrive. Now that may sound like a posh ratchet set, but it appears that it isn’t.

In short, the day job for them is making racing Astons, not converting road-going ones, but starting with new bare shells from the factory; also they do a lot of posh innovation stuff. We started off well with their state of the art coffee machine, and all was going swingingly with this geezer Craig, who was our guide giving us the heritage propaganda , explaining about all the rally cars over the years, until he made a basic error about the Rover V8, and all twenty of us jumped down his throat. He never quite managed to attain the high ground again after that.

Yours for £175,000, one of a series of Aston Martins of which 79 examples will have been built by the end of this year.

The upshot is that they will make a non road legal brand-new racing Aston at a starter price of 175 grand, or you can have one with more Vroom Vroom for half a big one. Hmmm! The cheaper job sounds quite attractive. Now what can I sell? And the geezer reckoned I could maybe make it road legal with a hooter from Halfords. 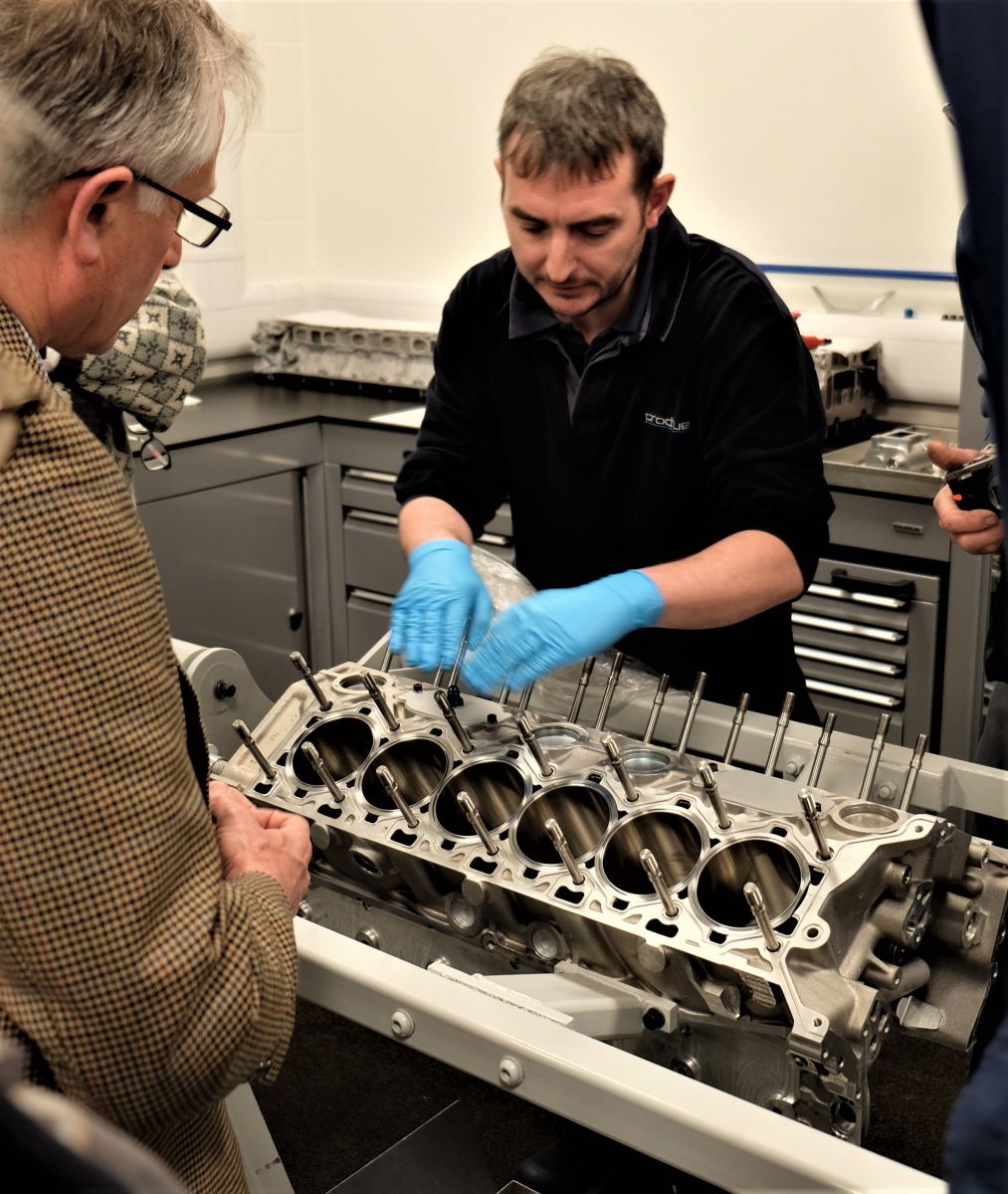 An Aston Martin V12 being assembled.

Now you can tell what a great trip it was as even Max, my sprog, wanted to come. This is a first!!! Up to this point his only involvement has been scaring the life out of me in a 105 around Silverstone. He was very impressed with the set-up, and wanted me to mention that Prodrive have developed a recyclable carbon fibre from flax, so I have mentioned it.

My own personal favourite was a weird Metro group B or something like that, with the steering wheel on the right, and all the instruments on the left - different!

Oh! How could I forget, computerised laser wheel covers, hmmm! Tasteful! Anything you want on the wheels - a favourite movie, family photos, or maybe a smiling video of our own esteemed editor, and it always stays the right way up on the move, (unlike our editor). How do they do that? A must for the next TOC rally or certainly for the Kings Road cruise.

And then, onto the pub. Great barmaid - she soon did away with those awful standard measures, and with an adept jaunty wrist-action, said  ‘We might as well finish the bottle, luv.’

So the big question is, how is Howard ever going to top this?  Next stop Barlby Road!!! 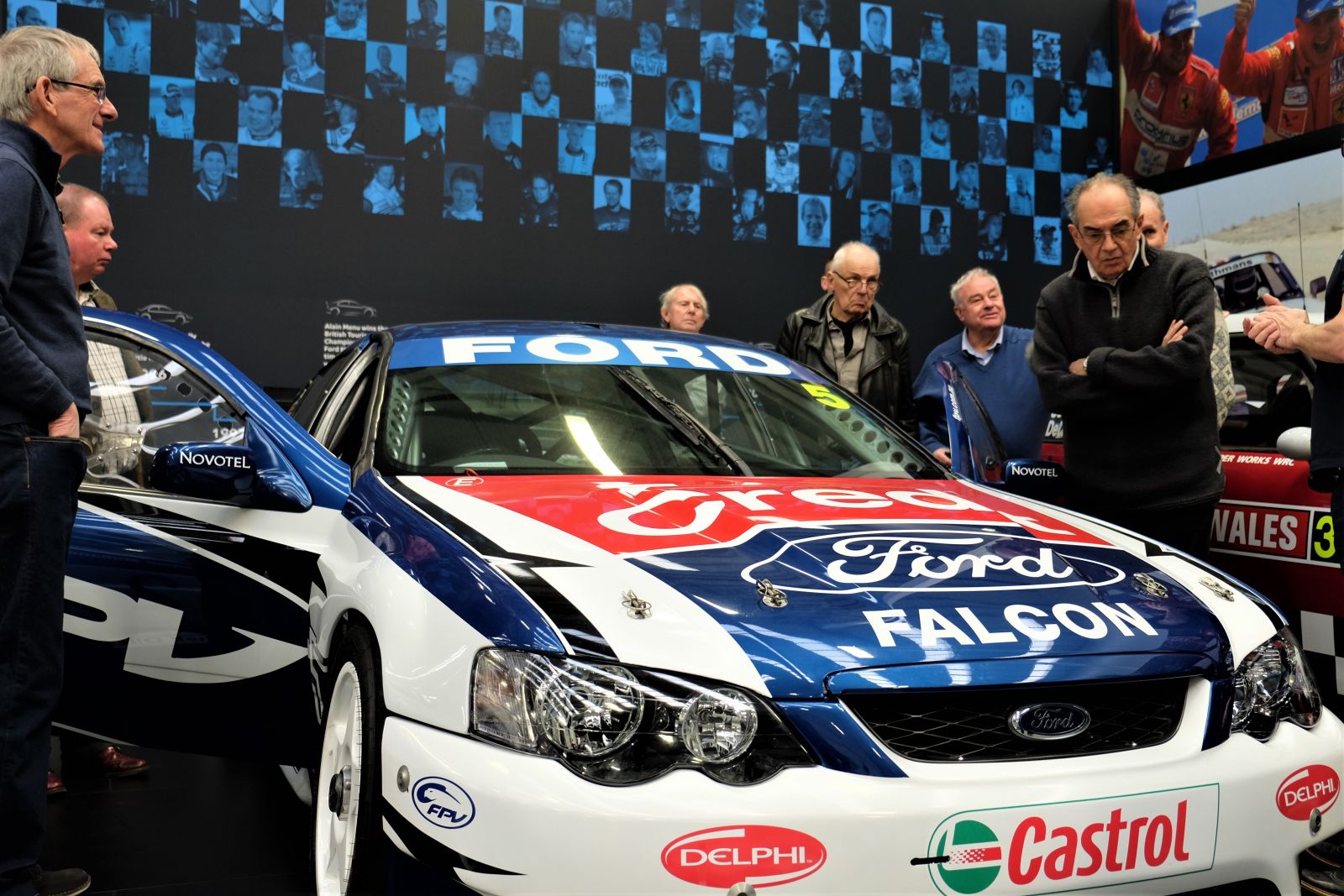 From their Heritage Collection - this is a Tickford - very different from the one recently saved by the TOC!

Prodrive is a privately owned company specialising in the preparation of race and rally cars and in the development of advanced technologies such as electric and hybrid vehicle (Prodrive have built 27 electric Ford vans for the Mayor of London).

They are at the forefront  of developing recyclable and natural fibre composites, particularly those that might replace carbon fibre, which is widely used in high-tech applications, but is not recyclable.

With interests in aerospace and defence, Prodrive  are part of the automotive corridor that leads the world in vehicle development.

Prodrive use the funds raised by these visits to provide free tours for young people to encourage them into a career in engineering.

With thanks to Howard Day for organising the trip.